From the start of re:Invent 2019, the experience this year exceeded expectations. Having been lucky enough to attend since 2014, the sixth round stands apart for a number of reasons. First, I finally accepted the theory that airport event registration is the future, where the queue time was shorter than the time it took the printer to churn out the badge. Game on.

Leading up to the event, I spent hours organizing sessions (or at least marking sessions as interests in the Amazon Events mobile application). As it turned out, the ‘interest’ sessions populated a massive amount of my planner and allowed for more agility in the conference, which was great for a person like me who thrives on spontaneity. 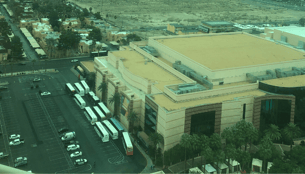 To make re:Invent manageable, this year I either stuck to a single venue for a day, or divided the day between two venues maximum to reduce travel time. And closely following ‘interests’ and repeat sessions for those sessions you may have missed made the week feel more productive and relatively relaxed.

Regardless of how well you plan, re:Invent is sometimes overwhelming in scale, with ~65,000 attendees plus another 10-20,000 Amazonians, 3,500+ sessions, and an expanded campus taking on the Las Vegas strip – it’s easy to get lost in it all.

A larger machine learning session example at the Venetian Theatre.

This year, re:Invent felt less like a superpowered cloud infomercial, and more like a series of infrastructure and advanced data platforms that are rapidly evolving and combining to make significant impact on reality. Looking back a year prior, the advances in both AI/ML service capability and applied examples for AI/ML are truly staggering.

The half day Machine Learning Summit provided a wide sampling of industrial, agriculture, healthcare, and applied science examples of how machine learning is being applied for the greater good. You can also see a conscious shift from AWS to promote well-meaning examples of technology in action, versus singing the virtues of the technology itself. The discussions on ethics also have evolved well beyond the general statements of ‘we need to be careful’ heard only months ago at re:Mars.

One of the most fun parts of the event was exploring the Builder’s Fair demonstrations across the Aria, MGM, and Venetian venues. These are small demo stands with the builders, who are all Amazon employees who’ve concocted a working live demo, invariably atop their first or second job. Here you see the creativity in the pores of Amazon, and, at least for me, the best part of re:Invent.

Here are my favorites:

ML-Generated Impressionist Painting of your Photo.

This team was brave enough to have a demo with a physical printer (a technology that somehow permanently missed the revolution). If this post gets any traction, we can together crash the online version at  deepdraw.io (menu upper right).

This demo takes a keyword input and pipes it to a SageMaker model, which generates a Sumerian host rapper segment, identifies the next top ranked keyword and pipes that to the next virtual rapper, and so on. You don’t quite get the energy and aggression from 8-Mile, but what this demo lacks in humanity is made up for in its ability to ‘battle for eternity.’  Or at least as long as someone is paying the SageMaker charges. AWS, can you please share us a link to this? The 8-Mile demo would support the concept that no-industry is safe from the machines, take heed Osdorp Posse - Werner Vogel’s favorite band of all time! 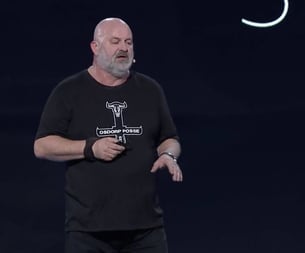 This demo included the builder who used EEG signals representing the ‘concentration brainwave’ along with a localized Greengrass IOT model trained to detect viewing patterns, such as ‘look left and concentrate’ to turn on a light. Entirely freaky, but you can see the builder was equally amused. But think about the immense potential for the disabled.

A demo of the ‘look left and concentrate’ technology activating a light bulb.

And beyond the fun and games, AWS is clearly investing massively on making AI/ML platforms more accessible (to non-data scientists), more deployable (to non-DevOps gurus), more targeted towards specific use-cases (e.g. Personalization, Detective, Fraud Detector, etc.), and applied directly to a wider range of day to day situations (Amazon Kendra, Contact Lens with sentiment analysis for call center flows, or automated code debugging with CodeGuru). Out of the innovation announcements, this was the headliner: 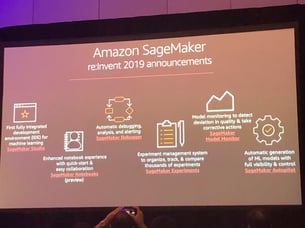 The broader implications are that Amazon is now running head-on with Google and competing for the baseline of a new industry of AI/ML builders and explorers. A few years from now we may be looking back and wondering what all the fuss was about the cloud. Imagine that!

Finally… My Big Reveal on the Best Part of re:Invent

The best part of re:Invent was….not surprisingly, the people. The community at re:Invent continues to evolve and diversify with global participation, and you have legions of people who are motivated, curious, and well meaning. This community of builders and entrepreneurs clearly represents the brightest future for AWS. I am looking forward to applying some of what I learned here at Mobiquity, and am already looking forward to my seventh year attending in 2020!

Mobiquity Featured in Inbound Logistics: 3 Ways Retailers Can Get on the Fast Track to Digital Transformation

Give us your information below to start the conversation.