Mobiquity featured in The Financial Brand: Is ‘buy now, pay later’ the future of consumer lending?

Mobiquity featured in The Financial Brand: Is ‘buy now, pay later’ the future of consumer lending?

To see the original publication of this article visit The Financial Brand.

That buy now, pay later purchasing is booming is indisputable. It’s a story that’s been building up over the course of the last several years. Predictions that it would surge to new heights during the 2021 holiday shopping season were supported when PayPal CEO Dan Schulman, appearing on CNBC, crowed that on Black Friday, “our volume on buy now, pay later was up almost 400% year over year.”

Schulman added that his company’s “Pay in Four” installment plans proved to be “one of the stars, actually, of the holiday season for us.”

Contrast that euphoria with comments by Scott Galloway, NYU Stern marketing professor. In a blog post written a few days after the national shopping binge, ironically titled “Red Friday, “he points out something that often seems forgotten by consumers who tap this service: “Buy No Pay Later is (wait for it) credit.”

An outspoken BNPL skeptic, Galloway adds: “The stale product formerly known as a loan has been rebranded as ‘Buy Now Pay Later’ … The premise is simple: Buy a product for a fraction of its cost at checkout and pay the rest of it off over a few weeks or months. The good news: Debt is not as bad as cancer. Though it can trigger depression or even revolution. But that’s another post.”

BNPL is often promoted as a friendlier way to spend without racking up credit card debt, with a key feature of most plans offered by fintechs being no interest rate, with merchants paying the lenders a fee instead. BNPL websites take a page from credit card promotions, showing photos of happy consumers happily, well, consuming.

Not everyone buys the BNPL message, especially when missteps can be costly in terms of fees. In congressional testimony, Marisable Torres, Director of California Policy at the Center for Responsible Lending, stated that: “We are wearied by the now-familiar claim, particularly among many occupying the ‘fintech’ space, that extending credit, without any accompanying requirement that it be affordable, promotes financial inclusion. Unaffordable credit may provide a quick inflow of cash, but it exacerbates financial exclusion over the longer term which, in the case of BNPL, can be just a few weeks or months down the road.”

“BNPL is a paradigm change that’s here to stay, and, frankly, we’re just getting started,” says Ruby Walia, Senior Advisor for Digital Banking at Mobiquity. Walia, who has worked at HSBC, Moven and TD Bank in digital services, points out that BNPL is “a payments capability as well as a lending capability. “Banks feel directly threatened by BNPL and they’ll probably move a little bit faster than usual because this is a material threat to them.” Yet Walia thinks banks could come out on top in BNPL someday, in multiple ways, if they play their cards right.

PayPal’s BNPL results on Black Friday were dramatic, but figures released by the California Department of Financial Protection and Innovation in late 2021 are even more startling.

The state collects data on BNPL loans as part of its annual census of lenders doing business there. The department found that the number of consumer loans rose by 530% in 2020 as compared to 2019, clearly due to BNPL growth because when those transactions are excluded, the number of consumer loans fell. In addition, the total principal financed increased by 96.8%. Of the loans made, the top six BNPL lenders accounted for 91% of the total consumer loans originated in the state in 2020 — that’s over 10 million BNPL loans.

Even with the caveat that BNPL loans are often used for smaller purchases, as opposed to car loans and other secured credit, that’s explosive growth in a state that may be a microcosm for the country. 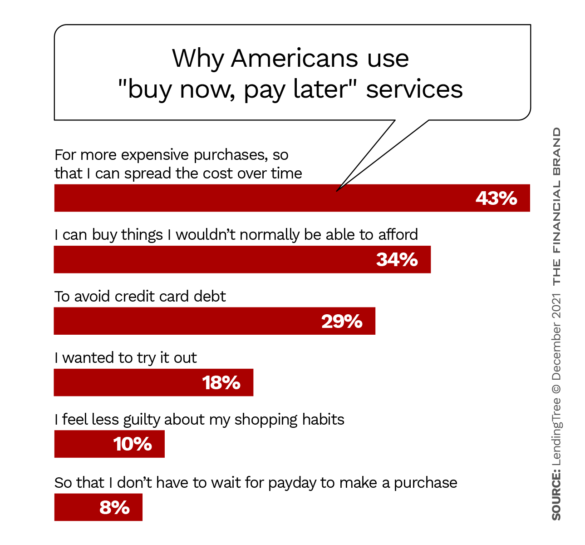 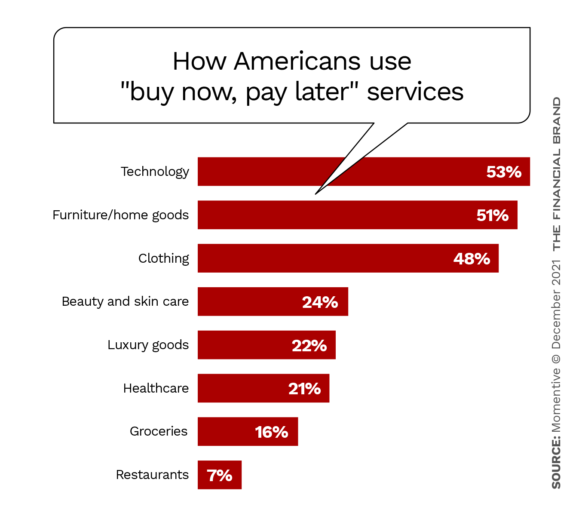 Many of the data points touching on BNPL result from surveys of consumers, with analysts extrapolating from those findings, rather than centralized counts. Some telling numbers come from a survey of over 3,000 consumers in 2021 by Momentive:

Is BNPL an Existential Threat to Lending?

Back in 2020, Scott Galloway interviewed Nick Molnar, Co-Founder and CEO of Afterpay (which Square/Block is acquiring) for his podcast, as Molnar was establishing the Australia-based company in the U.S. Molnar insisted that BNPL implies a different mindset than traditional credit, that it’s an improvement over credit cards.

It is true that typical BNPL plans are short term and not intended to roll over — though plan payments often can be made with credit cards. But “responsibility” is in the eye of the beholder. BNPL specialists sell merchants on taking part in the subsidized plans on the proposition that doing so will increase sales.

Jeffry Pilcher, Founder and Publisher at The Financial Brand, says the self-professed fear of credit, especially among Millennials, seems to warp under BNPL. And while BNPL is big in other countries, it seems to have come to its natural habitat in the U.S.

“There’s an impulsiveness of humans in general — Americans particularly, and Millennials especially,” says Pilcher. “Once someone has an item in their hands, they probably think, ‘I don’t want to put this back on the shelf. I want to walk out of here with this right now.’ Instant gratification.”

Galloway makes a similar point, saying BNPL “only works by capitalizing on the instinct for immediate gratification.”

Adds Mobiquity’s Walia: “You are basically spreading the purchase of a slightly bigger item at zero interest across two or three paychecks. That’s a siren song. Why wouldn’t you do it?”

Molnar and others make the point that Millennials saw the impact of easy credit on people’s lives in the Great Recession. But Pilcher suggests too much may be made of that.

Any kind of consumer credit, especially when it involves unsecured debt, carries the risk of spending getting out of hand before one knows it. Consider the shock many have when they see their holiday or vacation bills roll in after the fun is long over.

Many BNPL companies build their services around apps, which will track all of the individual plans a consumer has committed to with that firm. Given that these can start any day of the week, and that each BNPL purchase equals a fresh and separate plan, you can see that being able to view everything in one place would help. In addition, some firms make the point that users can only have so many plans open at one time.

As a blog on ConsumerReports.com points out, mismanaging BNPL plan payments can result in fees or interest charges.

“Those penalties may come as a surprise to some consumers, who may lose track of their payments or use more than one BNPL plan,” writes Penelope Wang. “The terms of the providers often differ, with some charging late fees or reporting to credit bureaus, while others don’t.”

There may be an opportunity in this mish mosh of credit entanglement, for both fintechs and banking institutions.

“This seems like a logical space for aggregators like Mint to play in,” says Ruby Walia. “They could construct a complete view of all of your financial commitments.” Any such tool would likely need to be mobile first, as BNPL can be used at checkout both live and online.

Longer term, Walia thinks this creates an opportunity for traditional institutions. While the trend today is towards mix and match financial services that are disaggregated from a single provider to many, Walia thinks this will reverse. Helping people manage BNPL debt would be one step towards this.

“There’s a huge opportunity for banks to provide that consolidated view and they would do it for free. It would give them a better understanding of their customers’ finances, and frankly, eventually help them migrate people away from some of those services into the options that they provide.” — Ruby Walia, Mobiquity

Are Traditional Institutions Bringing Knives to a Gunfight?

Walia points out that even as banks begin to join the BNPL game, they will not be playing the same game as the fintech BNPL firms.

The reason for any merchant to pay a fee of any kind to accept something besides cash comes from the desire to sell more stuff. BNPL firms get hefty fees for enabling more sales, some even higher than merchants pay to card issuers, says Walia. “They can afford to have a higher loss ratio because they’ve got more revenue coming in, and they often aren’t paying for the credit bureau pulls and more that you might need when you are using a more rigorous credit process,” he says.

“So the economics are different,” he continues. “It’s almost misleading to pay as much attention to the losses and the default ratio as has been paid, because it’s baked into the companies’ business model.” Pretty much the same argument has long been made about the credit card business.

Hanging out there are “other shoes” waiting to be dropped. Walia says the partnership of Apple and Goldman Sachs, known to be working on BNPL concepts, could produce the Apple Card of BNPL.

Meanwhile, Walia thinks traditional players may want to look at longer-term BNPL — plans of a year to three years — that have elements of the hotter trend but that are more like traditional installment loans. Ally Bank is doing this, for example, in several areas, including home improvement and repair, in partnership with Sezzle.

Brian Shniderman, U.S. CEO & Global Chief Strategy Officer, at Opy, explains that the cost of the plans is split down the middle — providers pay part of the cost as do the interest-paying consumers. He says the market is different, catering to “people trying to put braces on their kids’ teeth” without having to raid their emergency savings.

Some observers think this is the best niche for traditional institutions to exploit, meeting needs rather than impulses.

Rethinking Your Customer Experience? Follow These 5 Steps to Get Started 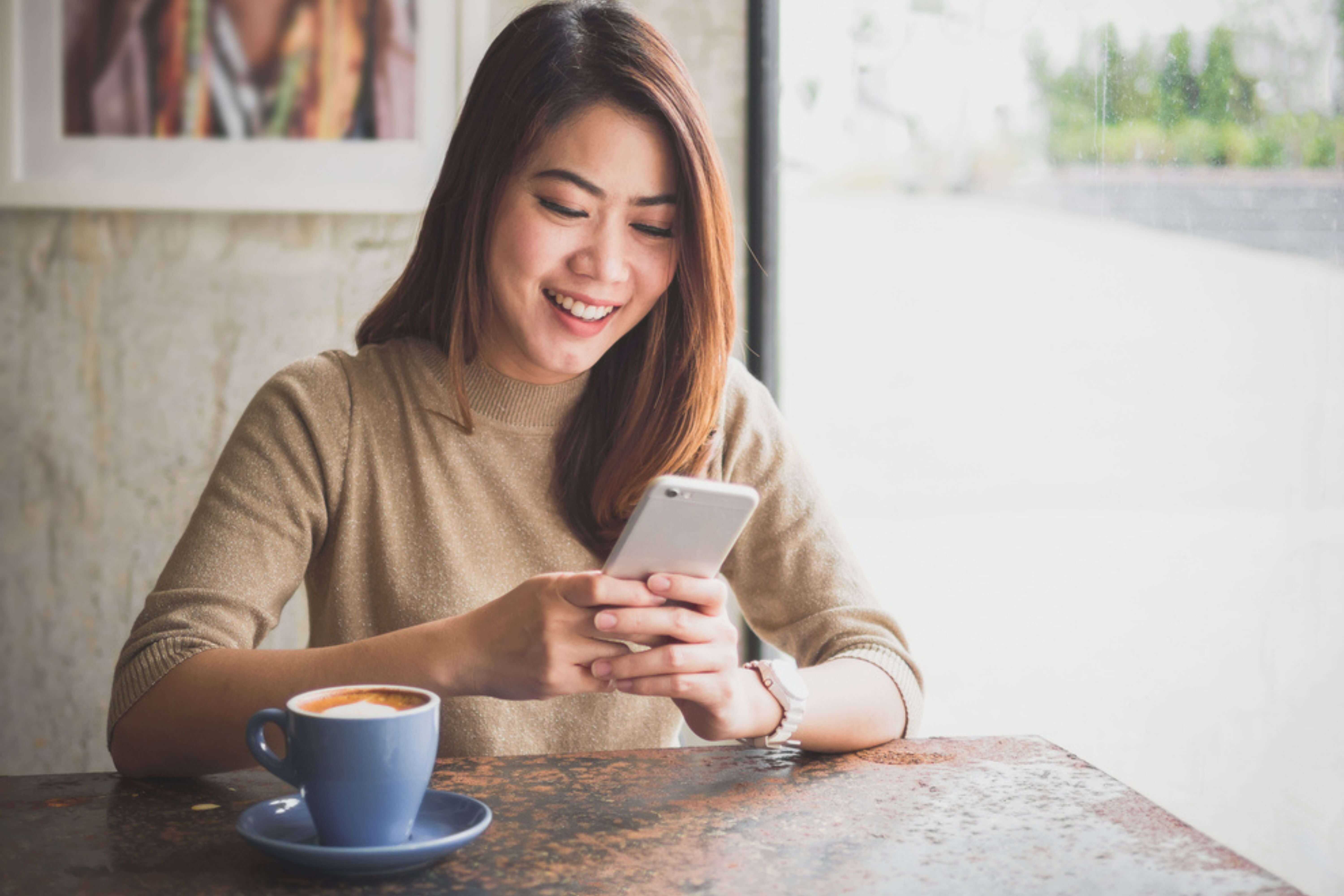