The leaders of Google’s Project Jacquard and Levi’s product innovation discuss why they think a jean jacket will make you covet smart clothes.

Ivan Poupyrev and Paul Dillinger come from very different worlds: Poupyrev, a technical program lead for Google’s Advanced Technologies and Projects (ATAP) unit, has spent years working on user-interface design and interactive technology, while Dillinger, the head of global product innovation for Levi Strauss & Co., has immersed himself in fashion.

These worlds collided more than a year ago, though, when Levi’s agreed to work with Google on Project Jacquard, an interactive fabric project that Poupyrev heads. It aims to create conductive textiles that can be manufactured like regular fabrics and woven into everything from shirts to teddy bears. The idea is that you’ll then be able to swipe and tap the fabric to do things like control music or get directions.

Right now, Poupyrev and Dillinger are gearing up to roll out the first Jacquard-enabled consumer product that will do these things in 2017: a jean jacket aimed at cycling commuters with conductive thread woven into one arm that connects to a removable, flexible electronic tag (the tag comes off so you can charge its battery and wash the jacket).

Poupyrev and Dillinger spoke with MIT Technology Review last week about how they decided on what to bring to market first, the difficulties of building interactivity into different kinds of fabrics, and when we might see a Project Jacquard couch.

How did you decide to make a jacket as the first consumer product for Project Jacquard? And what was that design process like?

Dillinger: When we started talking to consumers we found there’s a big group of people that had one jacket that was their go-to functional jacket that they would wear like three times a week or more. And they wore it that often because it had some utility, value. We wanted this thing to have value, we wanted people to use it often, and the best place to get that frequent use was going to be a piece of outerwear.

Paul Dillinger, Levi’s head of global product innovation, is working with Project Jacquard to create a smart jacket that you can swipe and tap to do things like control music.

There are also certain technical constraints. You launder your jackets less frequently than you launder your [jeans]. This was before we had all the confidence about the washability, this was when we were anticipating having to be a little more careful with it—what’s that one garment that isn’t going to go in the washing machine as often?

[And making] a commuter jacket made the needs even more explicit. When you’re on your bike, it’s about safety, awareness, focus. And that need started to inform the function that we saw as a potential value of this integrated woven tactile interface.

Lots of people have been working on smart fabrics, smart clothing for years. Nobody has been able to make it mainstream. Why do you think Google can do this with Project Jacquard?

Poupyrev: Instead of trying to take something from Levi’s and add our something as an add-on and sell it, we’re actually trying to integrate our technology into the supply chain, the manufacturing chain of the garment industry. So we don’t want to make our own garments. That was the biggest decision made by our team, by me, pretty much, from the very beginning, these fundamental things: we will not make our garments, we will empower industry to make their garments. And the industry is gigantic.

Dillinger: Where there’s a chance for success here where there hadn’t been in the past has to do with the configuration of the decision-making process. The people inventing the technology are not the people saying yes to using the technology. In this case, the invention of the technology was done by Google … and it was up to us to say, “That we can do it doesn’t mean that we should do it.”

What are some big differences between how textiles are made versus consumer electronics that Google has had to adjust to? 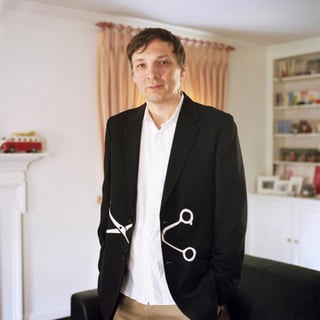 Ivan Poupyrev, leader of Google’s Project Jacquard, is trying to make smart fabric that can be easily manufactured.

The factory that’s making the conductive yarn is also a little different from what you’d typically encounter in consumer electronics, right?

I don’t remember [the output of yarn] exactly but it’s something like a meter every second or maybe every two seconds they’re able to produce. If you look at the [consumer electronics] production line, you have a phone coming out every two seconds from the production line. And we have, like, a piece of yarn. Like, alright, we’re talking about different scales here.

What are some major remaining issues for making interactive fabrics producible and usable on a mass scale?

Poupyrev: I think the big issue right now is we resolved this for cotton. The reality is that the variety of fabrics out there is just incredible, and all of them have a different manufacturing process. Not only different manufacturing processes, but the factories that provide them are specialized. The factory that makes denim only makes denim, a cotton-based fabric. They don’t do silk, they don’t do polyester, they don’t do synthetic fabrics … they don’t do wool, they don’t do, like, fine organza stuff. That’s a completely different factory. Now we think, “Okay, how are we going to scale that into wool, how are we going to scale that into synthetic fibers which are used by companies like Patagonia or North Face?”

Beyond clothing, lots of things rely on fabric—like chairs and toys, for instance. Where else might Jacquard fabric show up over the next year or two?

Poupyrev: Textiles is one of those materials that’s ubiquitous. So absolutely, we want to go further, we want to expand, we look at this as a platform. But we need to focus. We need to start with something and I think clothing and apparel is exciting. People get excited about it, people love it. There’s a lot of clothing being made. Fashion is awesome. We think we need to get it solved for the garment. If we solve for the garment, we can solve for the couches and for the cars and for the airplanes and seats or whatever textiles.

How to win big in a competitive D2C market 2022