Mobiquity Featured in Retail Dive: Will COVID-19 push contactless payments into the mainstream?

Mobiquity Featured in Retail Dive: Will COVID-19 push contactless payments into the mainstream?

To see the original publication of this article visit Retail Dive.

Multiple barriers have curtailed retailers' contactless payment integration. But a pandemic may be the catalyst to widespread adoption.

For essential businesses at the front lines of the COVID-19 pandemic, reducing risk for in-store customers has been a top priority.

With that in mind, companies have stepped up their sanitization regimens, limited the number of consumers in stores and introduced social distancing markers. But as retailers introduce worker and consumer protections, one measure hasn't reached peak usage: contactless payments.

A combination of barriers — ranging from legacy point-of-sale systems to learning curves on the part of both consumers and businesses — have slowed the adoption of contactless payments, experts told Retail Dive. But as the coronavirus pandemic forces companies to implement protective measures, experts are divided on whether the industry will gravitate toward contactless payments. Some anticipate retailers will integrate the technology on their own to appease customers or to address cleanliness concerns during and after the pandemic. Others say it may take government regulation or card issuer consensus to push retailers toward the technology.

Prior to the pandemic, some projections pointed to increased contactless payments adoption. Before physical stores were forced to temporarily close due to the coronavirus, a 2019 report from RBR suggested that the average value of card-based payments would decline from $67 to $62, because contactless cards were expected to be used more frequently for low-value payments. Additionally, a January report from Ingenico Group and Freedom Pay found that 75% of millennials and 70% of Gen Z shoppers said they were satisfied with contactless payments, with the latter group saying that they are a "must have" option for merchants.

However, it's unclear just how much contactless payments are gaining favor among consumers. Nathan Hilt, managing director at international consulting firm Protiviti, anticipates seeing contrasting data points as the outbreak continues. That is because retailers' transaction volumes are decreasing except for specific areas like grocery stores, making it more difficult to precisely determine where contactless payment adoption is increasing.

"For the future of cards ... that path has already been taken. We're already going down it. COVID might have just accelerated it a little bit." -Cyndie Martini, President & CEO, Member Access Processing

"When you think about mobile wallets and percentages driving [it], you have to go a layer deeper," Hilt said. "Were they the same year over year in grocery? Because that's the one that's really increased. And everyone else is just a false positive."

An early April PYMNTS.com report on mobile wallet adoption found that in-store mobile wallet use hasn't gained traction with consumers who have the smartphone capability to use the technology — even during the coronavirus pandemic. PYMNTS.com's research indicated that Apple Pay consumer usage peaked in late 2017, but has declined to about 5.1% of eligible transactions. Only 3.3% of transactions were made using Walmart Pay during the early-to-mid-March period studied, a decline from a 4.5% usage rate in 2019.  And that is despite that nearly 93% of all iPhones can use mobile wallets, and about 81% of consumers have Walmart Pay-capable devices, per the report.

On the other hand, data from another recent Mastercard survey suggested that 51% of U.S. consumers surveyed said they were using some type of contactless payments. The potential of transmitting germs at point-of-sale systems is a driving factor, with half of respondents reporting that they worry about the cleanliness of signature touchpads.

Some consumers, particularly younger consumers, were already keen on using contactless technology, such as mobile wallets, said Cyndie Martini, president and CEO of Member Access Processing, a financial services firm which aggregates Visa Debit Processing Service platform for credit unions. Younger consumers didn't always want to go through the typical checkout experience prior to the outbreak, but shoppers may adopt the technology more as they grow more comfortable shopping online and less so with in-person interactions, she said.

"I think we were already on the path for the ease of consumers, but we may see an acceleration now that people feel more confident doing online purchases without a card or the desire not to interact as much," Martini said. "For the future of cards ... that path has already been taken. We're already going down it. COVID might have just accelerated it a little bit."

For retailers that don't already have contactless payment technology in place, it's unclear whether they should invest in contactless capabilities, because it's hard to predict how consumer behavior will change in the long term, said Jeff Galak, associate professor of marketing at Carnegie Mellon University.

If faced with the prospect of spending hundreds of thousands or even millions of dollars to install new point-of-sale systems, retailers are likely to implement changes that they're required to make by law, but not much more beyond that, Galak said. It also takes some time for retailers to train employees who will then educate consumers on how to use the technology, he said.

"If they think all they need to do is put markers to make people stand six feet apart and put plexiglass to protect their workers, but they don't have to worry about point-of-sale to maintain customer loyalty, that's what they're going to do," Galak said.

Looking back on EMV chip usage as an example, it took time to become accustomed to inserting cards rather than swiping them, Galak said. Since consumers commonly pay with cards, contactless cards might be a smoother behavioral shift than using mobile wallets, Galak said.

Adopting new payment options, including contactless payments, is particularly expensive for smaller businesses, because they don't get the same rates as larger companies with higher transaction volumes, Martini said.

Even in 2020, having reliable internet connectivity can be a barrier for retailers looking to add contactless payments, because unreliable internet prevents retailers from processing transactions, said Sree Singaraju, vice president of cloud solutions at Mobiquity, an international digital consulting firm.

Signs from other countries point in that direction. Per a recent Mastercard report emailed to Retail Dive, 68% of consumers in the Asia Pacific prefer to shop at stores with contactless payment options, especially among millennial (80%) and Gen Z (73%) consumers. The report also found that 75% said they would continue to do so after the pandemic subsides.

To Hilt, government regulations requiring contactless payments would be disappointing, because the industry couldn't figure it out on its own. Ultimately, it would take time to spread contactless payments across the U.S., given that it's a far larger country than others, such as the U.K., that have already adopted the technology, he added.

Over the next year, tech companies might begin developing and introducing packaged APIs that can connect with mobile apps and enable smaller and mid-sized retailers to offer app-based contactless payments, Singaraju said. Retailers that haven't invested in mobile technology already can't pivot to provide contactless payments from a mobile app or for pickup orders requiring scanning through card windows or plexiglass, he said.

Retailers "are not going to be able to turn around and build out the architecture in two weeks," Singaraju said. "If you've already done that, then it's easier to provide an additional option in the mobile app."

Hilt anticipates that older consumers or late adopters may be slow to try out the technology unless it's sold to them as a way to avoid contact with a frequently touched point-of-sale terminal.

"Consumers have an expectation that merchants should be moving at the same speed they are," Martini said. "If I were a retail merchant, I would definitely be looking at new ways to take payment that kept my clients moving fast or quicker at the checkout line, because that's what people want." 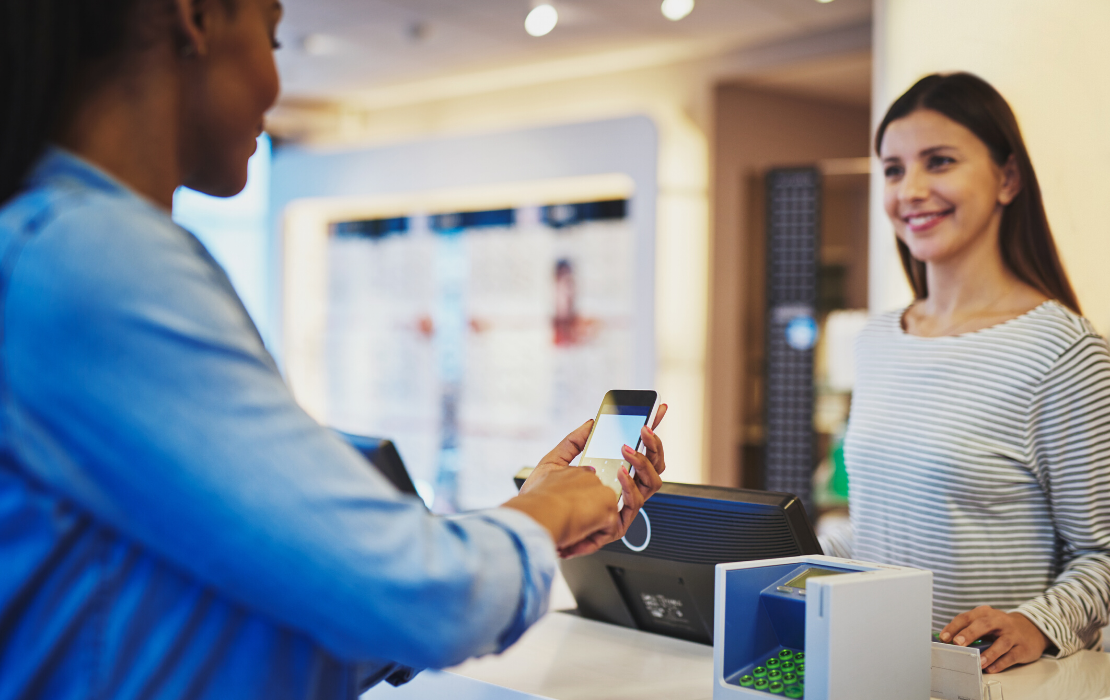